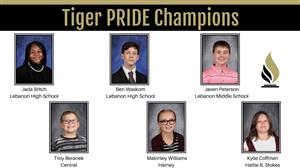 The staff at LHS is very proud to recognize Jada Stitch as an LCSC Tiger Pride Champion. Jada is an exceptional student at LHS, and exemplifies all aspects of PRIDE through her interactions with her peers and high school staff. Academically, Jada demonstrates PRIDE through her 4.1 weighted GPA while taking a rigorous academic schedule. She consistently demonstrates persistence and initiative in the classroom, and is always respectful, kind, and encouraging to her peers. Her respectfulness and dependability while representing LHS and the community is recognized and appreciated. In all that she does, Jada embodies the ideals of PRIDE as a true servant leader in our school and community. Congratulations, Jada for exemplifying what it means to be a Tiger Pride Champion.

LHS is very proud to recognize Ben Waskom as an LCSC Tiger Pride Champion. Ben is an exceptional young man that exemplifies all aspects of PRIDE in all that he does. He is a very goal-oriented young man who pushes himself to reach his immense potential through an unwavering commitment to the characteristics exhibited in PRIDE. While Ben has a great deal of natural ability, he also has a great work ethic. He has high expectations for himself academically and personally through his character. Ben is a young man with great character, integrity, and compassion for others. He always treats others with genuine kindness and respect. He is respectful and considerate to all those he encounters, and has represented the and the community with great PRIDE. Congratulations to Ben Waskom for being recognized as a Tiger PRIDE Champion.

Jaxen exemplifies what it means to be a Tiger Pride Champion.  He demonstrates persistence by always doing his best in the classroom and asks questions if he needs clarification.  Jaxen is always respectful to the teachers and staff at the middle school, as well as he fellow peers.  Jaxen is dependable.  Teachers can rely on him to be a leader, albeit a quiet one.  Jaxen leads by example, by doing his best, completing his work, and being kind to everyone.  We are proud to celebrate Jaxen Peterson as the Tiger PRIDE Champion for Team SWAG!

Troy shines brightly as Central's Tiger PRIDE Champion.  He moved here from Perry Worth just three short months ago and hasn’t missed a beat.  With only knowing just a few of the boys from sports, he has been a respectful friend to all and has adjusted so well.  During his Student Lighthouse interview last month, he told his interviewee that the habits were exactly what he had been missing from his life.  Troy has been introduced to each of the 7 habits and has already started living them in his daily life.  Troy displays great sportsmanship and thinks Win-Win in and out of the classroom.  He is both proactive and dependable.  Anyone who knows Troy, knows they can count on him.  He is very responsible and extremely efficient.  In fact, he always turns in all of his work on time.  Troy has the initiative and drive to do anything he sets his mind to do.  So we all know one day, we will all see him on the news as the next Todd Klaassen, your future meteorologist.  Congratulations Troy!

Makinley Williams is a perfect example of what it means to have PRIDE at Harney Elementary.  Kinley has had a rough start to the school year because of medical issues that forced her to miss some days.  But because of her determination and perseverance to succeed, she earned all As and one B for first quarter. She worked hard to complete her work!  Kinley still continues to struggle with her health, but you would never know it since she always has a smile on her face and kindness in her heart. Kinley continues to lead her class and other fifth graders as a Harney Impact Ambassador and Student Council Representative, both for a second year in a row.    This year Kinley has also taken on the additional role of morning announcer.  She is a role model for others and has a positive outlook. She shows integrity in her decision-making, often encouraging others to do the right thing. I’m proud to have Kinley Williams not only represent our class, but all of Harney as our Tiger PRIDE Champion!

Kylie is a bright spot daily in the classroom, coming in every morning with a good attitude and readiness to learn and help others grow. Not only good grades and academic strength qualify Ms. Coffman to be a Tiger PRIDE Champion and a leader in the classroom. It’s her perseverance, her ability to push through difficult tasks, her ability to think through tricky situations and come out of struggles with success and new knowledge. Every day she leads by example.  We are proude to recognize Kylie Coffman as our Tiger PRIDE Champion!